We had a baby boy this time. We already have a little girl. I just realized that I am writing this blog almost after a year. I think I need to rejunivate and start being more active in the blogs again. Hopefully it will happen soon. I hope all the blogger friends are doing great. Will come back soon with another post. Till then enjoy the FIFA world cup.
Posted by Jaggu at 11:32 AM 2 comments:

Whats happening to me???

I am sure you would have forgotten me.:-P. I am actually busy in moving to another place in US from the month of April. So quite busy and not getting any time at all to add the posts. I have moved to Columbus, Indiana from beautiful Portland, Oregon. Well I did not have intention to move, but had to do because of the job.

We are kind of settling down in the new place from last one month and kind of atleast feeling good since we moved in Summer. My kid is also growing fast and enjoying herself.

Otherwise, I dont have any updates further and will see you guys soon after the things settle down peacefully. I hope I will be back to normal soon.

Friends, I am really not getting into my mind what to write. So I think I will take sometime and then come back with a decent post. Till then, take care guys.
Posted by Jaggu at 2:40 PM No comments:

Telugu friends out there in the whole world, please see the below video and try to understand the real facts.
Forget about the politicians and their false promises. In the video he really explains th actual facts of how Andhra is formed and all the further developments.

Ofcourse the person who explained this is a politican, but nobody can change the facts right. So please see this as a telugite instead of telanganite or andhrite. Also pass this on to everybody who is emotionally attached to telangana movement.

Decide yourself first on what is right or what is wrong as an individual instead of getting into baseless arguments. Also please remember, past is past and we need to assess the current situation before arguing.


Let me put some reviews on the movies I watched recently.

Plot - With the help of his mentor, a slave-turned-bounty hunter sets out to rescue his wife from a brutal Mississippi plantation owner.

Wow!!!. This is the way I could describe any Quentin Tarantino's movie. What a movie!!!!!!
It was a great way to end the year with a fabulous movie. I never ever miss seeing any of his movies the first day. But due to some personal issues, I could not see this the day 1. Ofcourse I watched it on a later day.
His movies are so interesting right from the titles and especially the conversations.

Initially when I got to know that he is making this film, I was a bit depressed about the movie title. I thought he might be making more dramatic movie. But after seeing, I could say that this the best film till now of all movies. Everybody acted just picture perfectly. The cast he chose was awesome. Jamie Foxx, Christoph Waltz, Leonardo Decaprio and Samuel L. Jackson. All 4 acted amazingly well.


I cant specifically say who acted very well, but Samuel Jackson's character was very well built although its minor. Some scenes were so funny and circastic. You just need to watch the movie and experience.

I sincerely wish for Quentin to get Oscar for both screenplan and direction. He deserves it this time for sure.
Just waiting for his next film:) 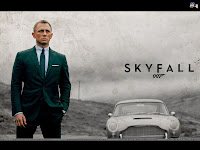 Plot - Bond investigating an attack on MI6; it transpires that the attack is part of a plot by former MI6 operative Raoul Silva to humiliate, discredit and kill M as revenge against her for betraying him.

Well, I cannot dare to miss a James Bond movie as it is my favourite genre ever. I was pretty disappointed with the last bond movie(Quantum of Solace). But this movie is surely not bad(although I am not completely satisfied..;)).


Primaily movie is not boring and some sequences are good like the opening fight sequence and the climax. Climax is completely different and far away from the regular james bond theme. May be they are trying to do something different with the current trend. But as usual, I am not happy with them not using the Bond theme music fully.


Let us see what's there in the next bond film which is confirmed to start shooting.

Plot - Piscine Molitor "Pi" Patel, an Indian boy from Pondicherry, explores issues of spirituality and practicality from an early age.

I dont usually see these type of movies, but had to go with some of my friends. But it was not at all disappointing. I somehow thought that it may be a bit boring. But its a nice story with good screenplay.

I am more amazed to see that it has lot of Indian flavor:). Overall a good movie worth watching. I wonder about the scenes they made with the tiger. Amazing!!!.

I am very happy to say that I gave a performance for Diwali celebrations at USA at my place. The peformance included singing songs in 5 languages(Hindi, Telugu, Tamil, Kannada, Malayalam). I wanted to do this from long time, but I got the right time for Diwali having audiences from all places.

And the happy thing is that my performance was the first to start with. It went well and sounded pretty nice(per my frineds and audience:)). It was appreciated by my family and friends back in India as well. I hope I can get into the music completely sometime. Hoping for the best.

http://www.youtube.com/watch?v=8vX0ClvSZoU
Posted by Jaggu at 3:28 PM No comments:

I hope you all have been seeing the incidents of killing infants and kids these days. It is so pathetic that they are doing it. I am amazed to even imagine how could they do it? How can they KILL(its a real big thing to do in life) a small life who is just seeing this world with little eyes.

Its absolute in-humanity and I dont consider them as humans at all. May be I cannot call them animals, because animals also might spare the little children.

And the most annoying thing is the fetacide and infanticide. Nobody in this world can determine if the child inside the womb can turn into a boy or girl. If we could determine, the whole world would have been filled with only the male species. Knowing this fact, how can somebody kill a fetus. And people, to be honest this is being done by some of the most educated section in the society. Its so in-human. People who are doing this should remember that they also came from a mother's womb. Ofcourse they wouldn't do it if they have such sense.

I think, by having stringent laws only doesnt do the justice here. There need to be some awareness in public as well. I have been reading those news these days and really moved. Atleast I thought I can help by spreading a word across the bloggers. So as a generic message for everybody - being educated or not, please dont do or plan for such things in the spur of a moment. Give a thought about what you are doing, you will understand how big crime you are going to do. Also please stop the incident if you know somebody is planning or inform the right authorities.